Once more All Saints Marsworth will be a hive of activity as over twenty highly skilled volunteers will be making well over 3,000 stems into the most magnificent floral creations, all based on this year’s theme of Time For A Rhyme, which we hope will give great pleasure to you and please spend as long as you like wandering around the church or enjoying a quiet and relaxing seat in one of the pews.

If you choose to follow the guide below (when the details are confirmed!), it will lead you around the church in a clockwise manner until you return to the main door. Please take as long as you like to take in the beauty of the floral creations and read the dedications on the pew poles and pew ends. Feel completely free to sit and listen to the music of the organ or other instrumental recitals and soak in the atmosphere and fragrance of the blooms.

There is plenty to enjoy in the marquee behind All Saints with refreshments being served all day along with light lunches and cream teas. There is also a BBQ and Pimms Tent as well as a tombola, raffle, second-hand books and DVDs, jigsaws and wonderful flower arrangements freshly made by our expert team of arrangers – to your own specific requirements if required.

Enjoy a second stroll through the church before going home and marvel in the majesty of the amazing creations and hopefully take some glorious memories with you.

Below is be a short piece of information about each display and why the arranger chose that particular rhyme:

A selection of poems written by the children and small arrangements made during their summer holidays to illustrate their favourite nursery rhymes.

A favourite nursery rhyme of young and old.  See the magic and wonder in the sky.

Meteorologists have observed that there is a basis in experience for this traditional proverb.  If it has been raining during the night and early morning the storm will soon blow over.

4. Window to left of Vestry door - Frances Brown - The Owl and The Pussycat. Sponsored by WOLFeyewear Ltd

The Owl and the Pussycat is a nonsense poem by Edward Lear first written for his friend’s 3 year old daughter and published in 1871 as part of his book “Nonsense Songs, Stories, Botany & Alphabets”

John Macrae wrote this poem as he sat looking at the grave of a dear friend killed in May 1915.  As he sat he saw vivid red poppies springing up amongst the graves and he was moved to write these familiar words.

The crooked stile in this rhyme may well be the border between England and Scotland agreed during the reign of Charles I that enabled the English and Scots to live alongside each other in relative peace.  The crooked man is thought to be the Scottish General Sir Alexander Leslie who secured the agreement.

My arrangement depicts a sunset.  When I was a child school summer holidays were spent in rural Wales and we hoped for lovely sunsets each evening knowing that the next day would be fine and sunny.

The rhyme by which we remember the number of days in each month is ancient.  A version from a manuscript dated 1425 reads:

A manuscript from 1555 records the version we are familiar with today.  It is a wonderful opportunity to celebrate the beauty colours of nature changing through the year.

Cargoes was one of the first poems I ever had to learn by heart.  It conjures up vivid pictures of apes and peacocks; riches beyond belief; diamonds & emeralds; gold moidores  and then a dingy old steam ship lugging coal.

Another favourite poem that paints a picture of this majestic animal.

‘Ringa ringa roses’ warns that coughs and sneezes spread diseases: in fact this rhyme is about the great plague.

‘Oranges and lemons said the Bells of St Clements’ is a traditional English nursery rhyme, folk son and singing game which refers to the bells of several churches all within or close to the City of London.

My interpretation of this saying includes an umbrella, raindrops, maypole, rainbow and baskets.

‘I’m a little teapot’ is an American song published in 1939.  The writers ran a dance school and wanted to teach their students a routine but it was too difficult  so they wrote this song which required minimal skill and encouraged pantomime.  Short and stout perfectly describes me!  I was going to use Bacardi and Coke to pour out of the teapot into the cup but knew I would drink it first!

Although this was first published in the 18th century its origins can be traced to the 16th century.  The king and queen are popularly believed to be Henry Tudor (VII) and Elizabeth of York. Henry kept a tight grip on royal finances, accumulating great wealth, hence being in the “counting house, counting all his money”.  Elizabeth remained solely in a domestic role as wife and mother “eating bread and honey” and is often portrayed as the Queen of Hearts on playing cards.
Tudor banquets were extravagant affairs, with exotic birds such as swans, peacocks and songbirds frequently on the menu.  An Italian recipe from 1549 describes making a pie from which live birds would fly out to enthrall the king and his guests.  We learn from Shakespeare’s “A Midsummer Night’s Dream” that the going rate for a song from a minstrel was sixpence. Later in the reign of Henry VIII the blackbirds were said to symbolise monks, angry at the dissolution of the monasteries.

17. Pew Poles and Pew Ends. Sponsored by many families and individuals

Memories, tributes and celebrations are all there on the cards which accompany each arrangement.  A team of ladies worked all day to complete the arrangements for the pew poles and pew ends. 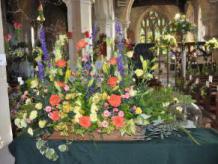 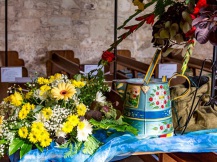 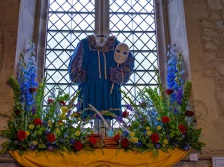 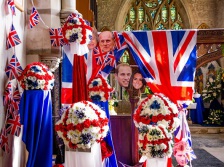